A group of professional folk musicians in St. Petersburg, Russia, spontaneously got together in 2005 and formed Otava Yo as a side project. They wanted to create new interpretations of Russian folk music, accessible to all audiences, and to revive old favorite Soviet tunes
After working on its “Russian beat” concept for three years the band released a new album, “Once Upon a Time.” (…) womex.com/ 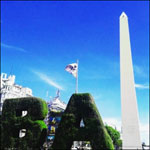